When Designers Take Sides: Are We Creating Infographics or Propaganda?

We have never lived in an age where information has been more accessible. The Internet, in particular, has imbued us with a sense of total omniscience – the answers to all of our questions are always just a few clicks away. But is all as it seems? 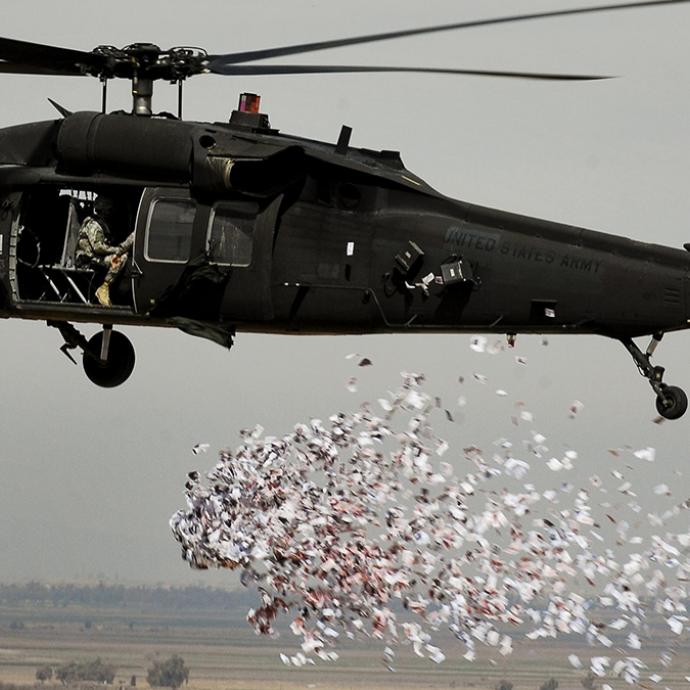 Information should not be confused with knowledge – what we obtain when we consume and understand information, to arrive at a justified and true belief (Plato, 1935). Knowledge is arguably where the power resides, and in a counterproductive twist of fate, perhaps this super abundance of information – or ‘data glut’, as David McCandless has coined it (2010) – is hindering, not helping our pursuit. And it could be argued, that in this struggle, comes the rise of propaganda.

Propaganda is information, o en of a biased or misleading nature used to promote a particular point of view. (Oxford English Dictionary, 2008). Essentially, you have an organisation with a desired result in mind – who then pursue a way of communicating it to the masses. For many, propaganda is synonymous with the wartime posters of past. ese visual displays were designed to invoke fear, fury or ardent patriotism, in a context of great con ict and uncertainty. It was a method employed by governments to gain citizen compliance, by appealing their emotional response. Think ‘Lord Kitchener Wants You’ – Britain’s heavily mustached Secretary of State staring and pointing at you, calling you to enlist in the British army. You may be surprised to know this method of persuasion is not entirely a thing of the past – ‘information warfare’ is a technique employed by the US Military to this day. On March 16th last year for example, a US F-15E fighter jet dropped 60,000 copies of grisly anti-ISIL propaganda on Raqqa, the base of operations for the Islamic State of Iraq (DC Dispatches, 2015). However with free and widespread access to information, this example of graphic design has largely lost its influencing power.

Data visualisation on the other hand, is a rapidly growing discipline in a culture shifting from the written word towards the image (Crow, 2006). Infographics are being seen as more ethical sources of information, as they can present reliable and quantifiable data. But is there more to them than meets the eye? Mushon Zer-Aviv contends that we are trained to “process the products of language as arguments”, but “the visual environment as evidence” (2014). As a result, selective data readings and visual trickery can still manipulate the masses – not through the spreading of false information, but rather the visual misrepresentation of it. In these cases, design can still lend itself to a predetermined narrative, rather than an unbiased representation of the data. Pictograms for example, are repeat o enders in the oversimplification of complex information. In an infographic offering from LiveCitizen.com (a pro-life website), the process of abortion is indelicately reduced to the icon of a woman, a baby and a dustbin (Zer-Aviv, 2014). Barack Obama was also criticized in his 2012 election campaign, for using graphic illustrations to over-simplify the issues he was tackling (Lepore, 2012). Colour, scale, and structure can also play a part in visual deception. Truncating the y-axis of graphs, for instance, can create an amplified and ultimately untrue representation of a dataset. This is a technique often appropriated by fear-based media, to heighten danger or urgency in news stories. Preying on and justifying the anxieties we hold enables them to reliably secure ratings and capital (Serani, 2011). So bearing all this in mind, infographics are arguably not exempt from the art of demagoguery.

Graphic design is a powerful tool, for good or bad – and truth is an easy victim of power (Roberts, 2006). But what does this mean for designers? Is it always our responsibility to be concientious of the message being received? Arguably, everybody will interpret a data visualisation slightly differently. Wainer argues that anybody viewing an infographic will “interpret its appearance as a sincere desire on the part of the author to inform. In the face of this sincerity, the misuse of graphical material is a perversion of communication, equivalent to putting up a detour sign that leads to an abyss” (2000). This explores the concept of ‘freedom of choice’ as a basic human right; in order to have true freedom of choice, we must be fairly informed of our choices. Tufte writes that creators of data presentations should be held intellectually and ethically responsible for their work, in order to make the consumption of said work an intellectual and moral activity (2006). In essence, data does not lie – humans do. That said, graphics can still mislead without the concious intervention of the designer. So ultimately, the viewer could still arrive at the same end result (adopting a biased view of the information). A way of limiting this is letting the data do the talking, rather than its presentation. Also to try and preserve transparancy, data visualisations should be accompanied by a ‘blueprint’ – explaining how and why the data was manipulated. This empowers the viewer in making their own conclusions from the presentation.

So even adhering to a strong ethical code may not entirely ensure we are presenting unbiased information. It is still absolutely important nonetheless, in maintaining integrity in the profession of graphic design. And this is also not to say we must refrain from visual communication, which has limitless possibilities and impact in this information age. Instead, we should accept that the visual communication of data, whilst exciting and o en beautiful, is an inherently awed and human process. As designers, we should strive for honesty in our approach to visual communication. But as consumers of designed information, we also have a responsibility to think critically. It is important that we seek to develop the visual literacy skills necessary to cut through the ‘hidden’ propaganda. With these skills, we improve our access to information; and ultimately, our path to acquiring real knowledge.